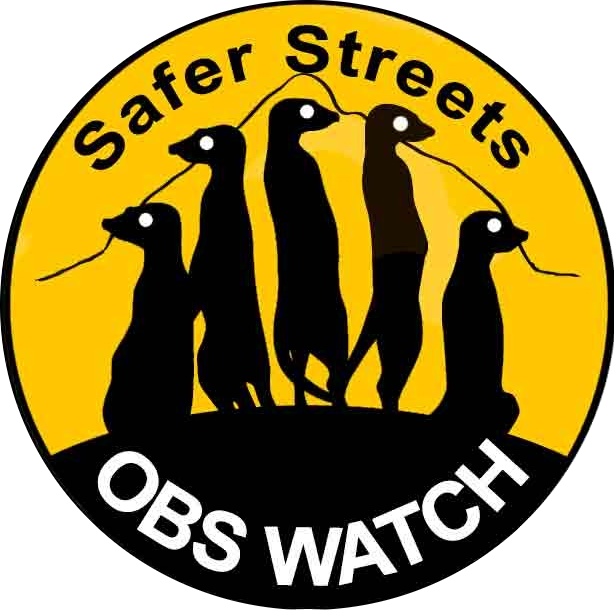 The eyes of the community

The Observatory Neighbourhood watch was started in 2007 in response to rising crime in Observatory. Two community leaders, David Raphael and Brian Gray, were instrumental in setting up the radio network and drafting the the founding  docs of the neighbour hood watch.

The purpose of the Observatory Neighbourhood Watch is to encourage residents, visitors and business in  Observatory to vigilant of their surroundings.

We encourage the community know their neighbours and look out for each other. We ask that all incidents get reported  so that pro active response can be taken to trends. We also also foster relationships with the Woodstock SAPS, Obsid, Security companies.

The neighbourhood watch creates a sense of community by having members looking out for each other. Being observant, communicating and reporting any suspicious behaviour all aids in the prevention of crime and creates good neighbourliness. We aim to work in conjunction with local SAPS, CPF, OCPS-F, OBSID and security companies to create an effective security network in our neighbourhood.

Today, you can visit the Heart of Cape Town Museum to learn more about this historic event. This piece of history is yet another reason to be proud as a South African! Honour your heritage by paying a visit.

Observatory Neighbourhood Watch is in Observatory, Western Cape, South Africa.
Observatory, Western Cape, South Africa
Did you know??? Reporting crimes DOES make a difference! Read on below for an explanation from our local crime response team! #Repost @obsidct with @make_repost
・・・
There is a direct correlation between crimes reported to SAPS and resources deployed. This means if you don’t report crime and incidents in Obs to SAPS, there will be less of a police presence, thus increasing opportunities for criminal activity. OBSID encourages Observatory residents to report all crime and suspicious activity to SAPS and the 24/7/365 OBSID control room.
#OBSID #KeepingObsSafe #OBSIDSAFETY #ObservatoryCapeTown #ILoveObs

Observatory Neighbourhood Watch is in Observatory, Western Cape, South Africa.
Observatory, Western Cape, South Africa
Have you seen the awesome art inside and outside @_tapi_tapi ? We love this place and everything it stands for. A real Obs gem! If you haven’t been there yet, head straight there NOW. #Repost @_tapi_tapi with @make_repost
・・・
Kukwana.
Zulu symbology references 🔻 as the symbol for the feminine, typically in reference to a child while the 🔺 references the young masculinity. Varying combinations of the triangles then in turn reference masculinity and femininity in different forms, age and relational status.

The 🌞 hemisphere also refers to physical and masculine energy while the other hemisphere is in reference to the moon and spiritual realms. This is a thread common in many global cultures and especially so in African deity mythos.

This is the new iconography for the non gendered bathroom at the café. Renovations are in full effect and excited to share the new space soon.

Observatory Neighbourhood Watch
Do you know Raymond? Next time you see him, give him a smile and a wave! Maybe say thank you. 🙏👋💪 #Repost @obsidct with @make_repost
・・・
My name is Raymond and I’ve been working with OBSID’s Urban Management team since 2017.
I drive the “bag run” truck. We collect garbage in Obs daily.
I am proud to be playing a part in keeping Observatory clean, the highlight of my day is meeting and chatting with local residents. Sometimes a friendly wave or gesture can make all the difference.
I am very involved at my local church and try to help out wherever I can. I enjoy listening to Gospel music and spending time with my family.
#OBSID #OBSIDCleaning #KeepingObsClean #ObservatoryCapeTown #ILoveObs